Warning: A non-numeric value encountered in /kunden/255441_13086/webseiten/ghettospuren/terezin/wp-content/themes/Divi/functions.php on line 5752 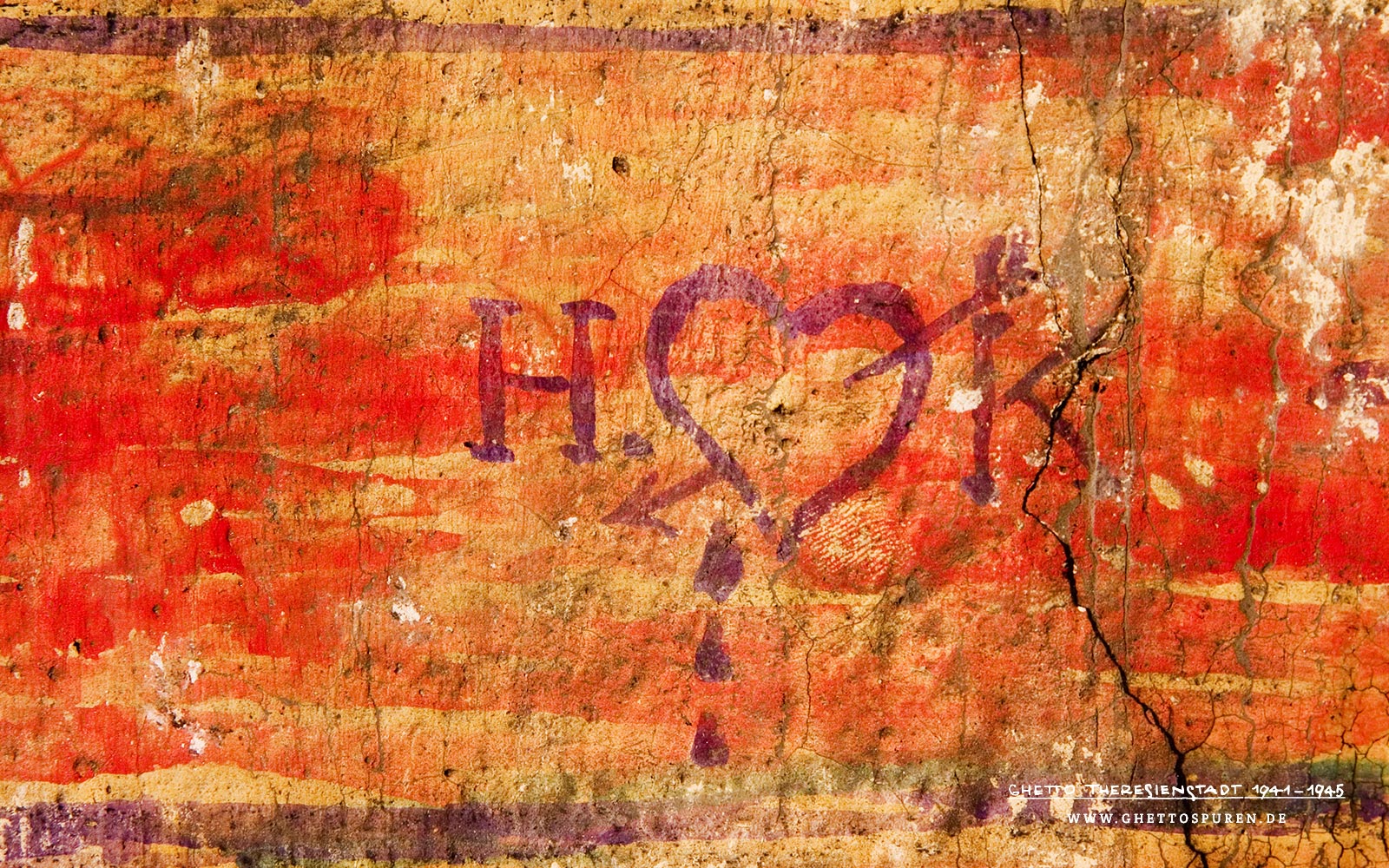 Unique finds of Holocaust traces, material reminders of the imprisonment of thousands of inmates of the Theresienstadt Ghetto, is now being documented online.

Almost 70 years after the end of the Second World War and the fall of Nazism, distinctive traces of life at the former Theresienstadt Ghetto, never before seen, are coming to light. The finds, which have been discovered throughout the modern day town of Terezín, will officially be made public in May 2015. The first results of the documentation of these remnants and traces have just been made available online at www.ghettospuren.de. An English language version will go online soon.

The objects that have been found thus far were discovered in buildings throughout the small Czech town of Terezín. They are generally simple and often very personal messages from the past. Today, messages of love, satirical verses, simple initials left as life-signs, as well as murals expressing a longing for home are but a few of the many fragments of prison-life being found and meticulously documented by experts throughout Terezín.

The material evidence that has been found thus far are traces from the time when Terezín was better known as Theresienstadt, an enormous prison for Jews from half of Europe – whose inmates had to organize their daily survival from within the attics and cellars of the town’s buildings as well from the casemates of the old fortress. For almost 70 years, no one showed interest in these traces.

“When we started our internet campaign in 2012, we knew only of a handful of these hidden treasures”, Uta Fischer, the project’s manager said. “During the past two years we continued stumbling on dozens of new finds”, she continued.

“O bug, o ugly beast, what dances you all night upon my leg … ” With these words written onto the walls of an attic, an unknown prisoner sarcastically immortalizes his complaint about the bugs in the ghetto. The bug itself, cause of his torments, was also doodled on a wall as were touching animal scenes painted for a little child’s eyes, in another attic. Elsewhere in Terezín, members of theghetto police left their mark on a sandstone archway. Many of these silent witnesses are doomed to disappear because of building renovations, vandalism, and erosion. Uta Fischer, a city planner based in Berlin, took the initiative in bringing this documentation project to life “before it is too late”. She sees an urgent need to document Theresienstadt’s hidden treasures now.

Ms Fischer is being supported by an acclaimed and dedicated team of German and Czech experts. They include conservators Prof. Thomas Danzl and Karol Bayer, news photographer Roland Wildberg as well as building researcher Jiří Smutný. Financing was made possible by the Kulturstiftung des Bundes, the German Federal Cultural Foundation and other institutions in Germany and Czech Republic.

Project information
The project „Evidence and traces“ was initiated in May 2012. Since May 2014 it has received support by the German Federal Cultural Foundation, the Remembrance, Responsibility and Future Foundation, the Prague-based German-Czech Future Fund as well as other partners in Germany and Czech Republic. Project management is led by Uta Fischer of Büro Wildfisch on behalf of the Association of Friends and Sponsors of Theresienstadt.

Project partners include the Terezín city administration (CZ), the Military Historical Club – Fortress Terezín (CZ), the Department of Art technology, Conservation and Restoration of Wall Paintings and Architectural Colors, College of the Fine Arts in Dresden (D), the Department of Restoration Sciences of Pardubice University (CZ), Terezín/Theresienstadt Memorial (CZ) as well as the Terezín Initiative (CZ).

Unique finds of Holocaust traces, material reminders of the imprisonment of thousands of inmates of the Theresienstadt Ghetto, is now being documented online. 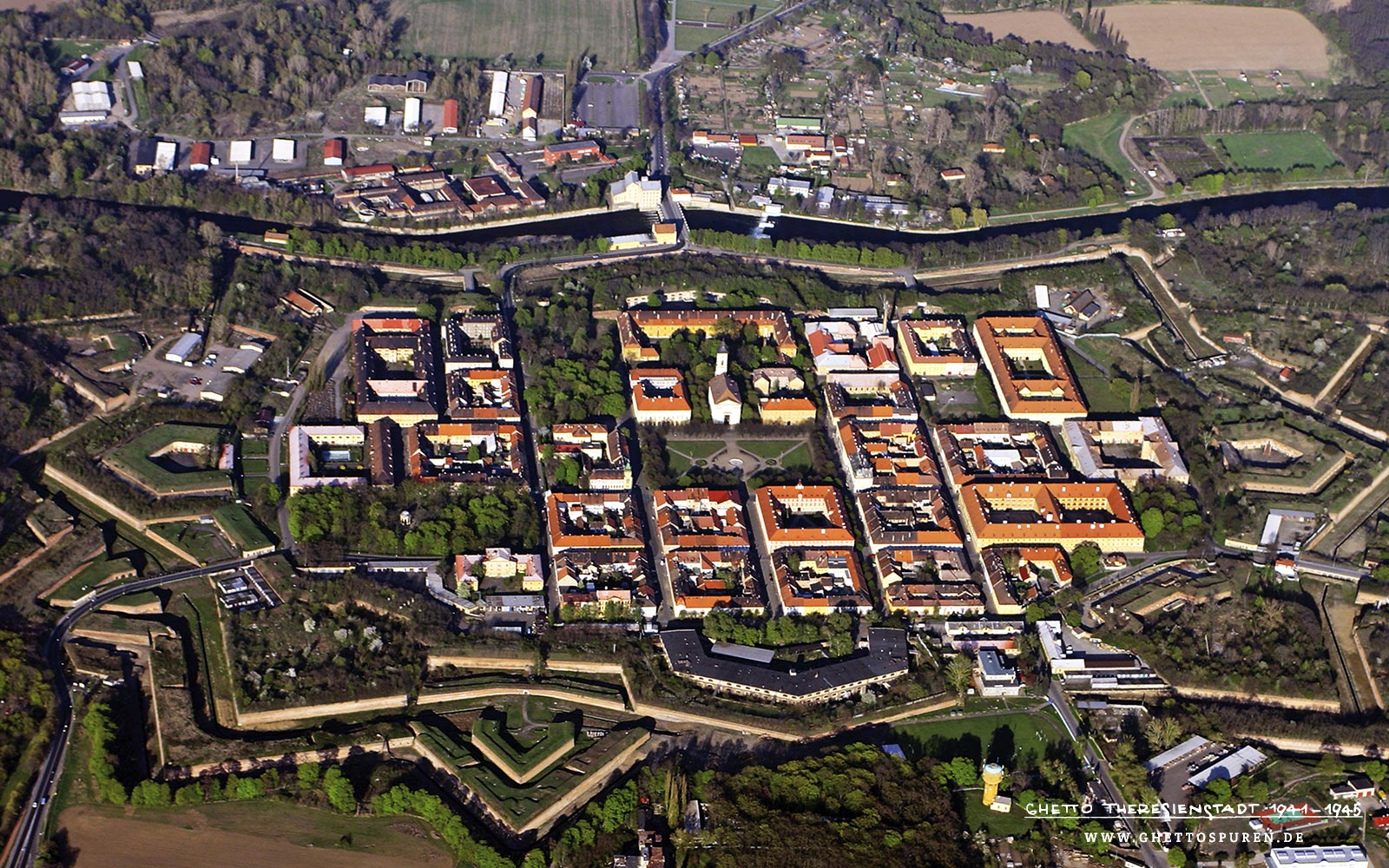 Aerial photo
This aerial photo shows today’s Terezin from 1,000 meters. The town is a bastion fortress built at the end of the 18th century. ©WILDFISCH, Roland Wildberg, Uta Fischer 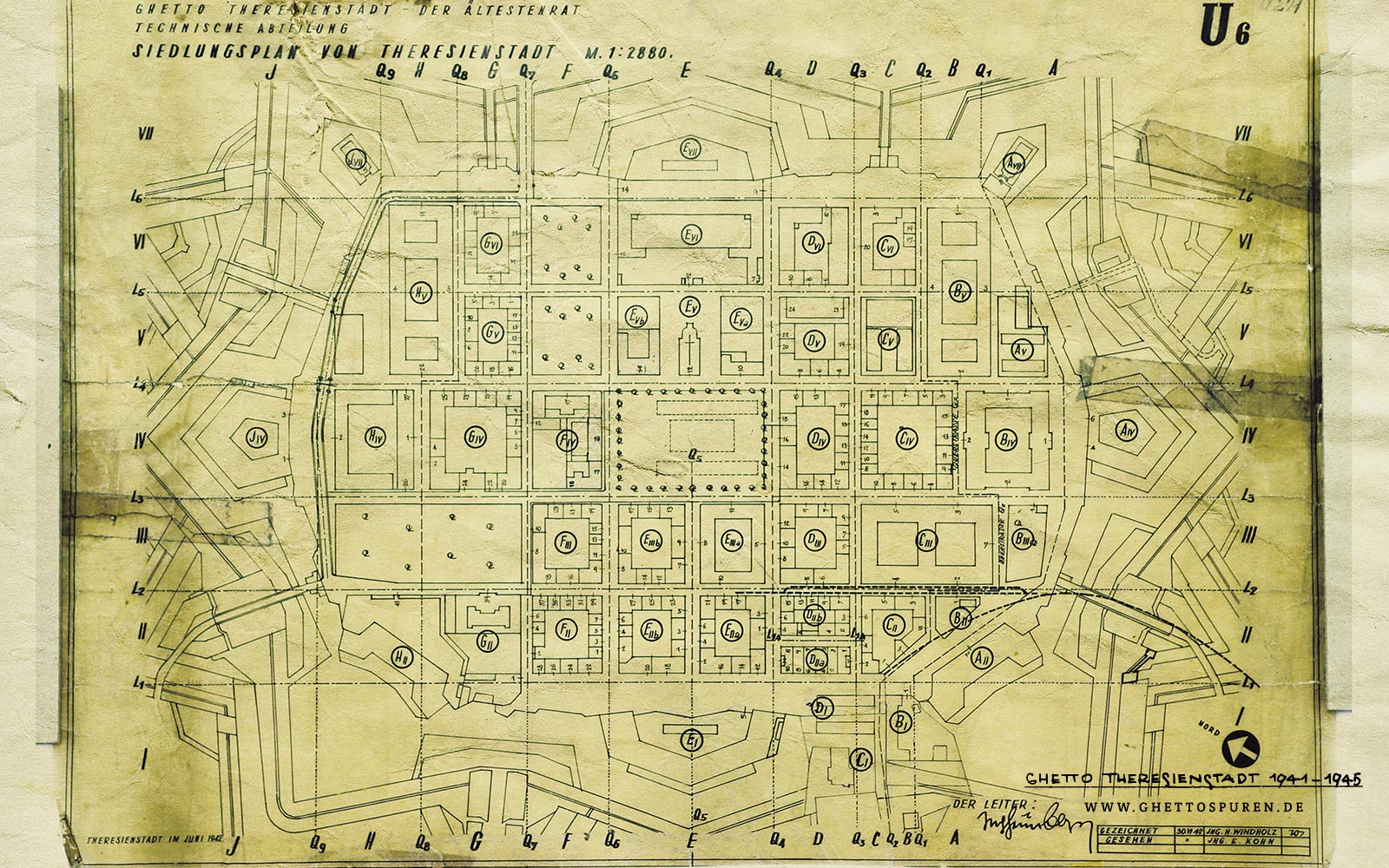 Ghetto Plan
This is a photo of the so-called “Settlement Plan for Theresienstadt.” The new train track into the ghetto is clearly marked. It was designed and built by the prisoners to facilitate SS logistics in bringing the transports directly into Theresienstadt. This blueprint from 1942 was drawn up by the technical department of the ghetto’s Jewish self-administration. ©Regional Archives, Litoměřice, CZ.

Guard Posts
Members of the Ghetto Police (Ghettowache) left this Czech inscription on one of the fortress gates. It reads: This gate was guarded by the Ghettowache, 1944, A.D. ©WILDFISCH, Roland Wildberg, Uta Fischer